There’s an old saying that “a mother’s work is never done.” Sarah Miller is a living example of just how true that statement is – and how rewarding life can be, even with all the effort it entails.

Miller enrolled at Ivy Tech Community College in 2006, right after graduating from high school. She took a break, however, and returned with some new responsibilities as a single mother of young children. That led her to look for flexible options as she continued her education. 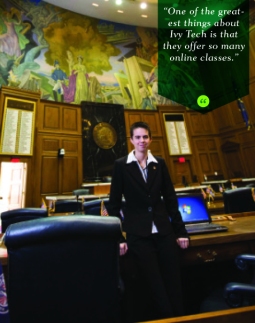 “One of the great things about Ivy Tech is that they offer so many online classes,” Miller says. “As the mother of a five-year-old and two-year-old, I could not have done it without this convenience.”

Miller’s willingness to shift to a new way of learning – and her hard work – are paying off. She graduated in May with an associate degree in computer information technology, with an emphasis on computer security. She also earned an internship at the Indiana Statehouse, where she had contact with some of the most influential people in Indiana.

The internship made Miller’s day quite a bit longer. She commuted about 60 miles from Kokomo to Indianapolis every day, dropping her children off at daycare at 6 a.m. The commute back to Kokomo was especially grueling, and she seldom arrived home before 7 p.m.

“It wasn’t easy,” Miller says, “especially being single. I’m grateful my children have an amazing father who helps out by picking them up
after daycare.”

At the Statehouse, Miller was responsible for everything from troubleshooting printer and network issues to completely rebuilding computers. She also assisted in the live streaming of community hearings and other government sessions, making sure anyone with an Internet connection could have access to the coverage. In addition to the hands-on experience, Miller says the connections she made, and the opportunity to showcase her commitment, were invaluable.

“I got to work with such high-caliber people,” she says. “I feel that when I left the internship, I’d made important connections to help me move forward with my career. I think the fact that I commuted every day for this job shows my dependability and work ethic.”

While both her internship and studies at Ivy Tech have come to an end, Miller’s education isn’t. She hopes to earn a bachelor’s degree and then a master’s so she can land her dream job of working in computer forensics for the FBI. Accordingly, she’s grateful to Ivy Tech for giving her the opportunity to experience the world of computer security in a government setting.

Not surprisingly, though, Miller is most thankful for her parents, Greg and Crystal Miller, who sacrificed for her when she was young, and for setting the example that she follows in working hard to support her children.

“They have been extremely supportive,” Miller says. “I wouldn’t be where I am if it weren’t for them.”